This Friday, 5 October 2012, France and 15 African countries, members of Franc zone (Central Africa region in 1972, West Africa region in 1973 with Comoros) are celebrating the 40th anniversary of their monetary cooperation with France. Did anything change? For whom?

This Friday, 5 October 2012, France and 15 African countries, members of Franc zone (Central Africa region in 1972, West Africa region in 1973 with Comoros) are celebrating the 40th anniversary of their monetary cooperation with France. In fact, the real CFA Franc birthday was the 26th of December 1945, 67 years ago. It was called Franc of the French colonies of Africa: at that time for 1 FCFA, you got 1.70 Metropolitan Franc (MF) and in 1948, 1 FCFA for 2 MF.

The main purpose of the creation of the FCFA was to reestablish the French monetary authority on French colonies after the Second World War. This overall strategy has not really changed in 2012.

In fact, if African economists could write the history of the FCFA, 1853 should be the birthday of the first bank of the Franc Zone 159 years ago with the creation of the Bank of Senegal, Dakar, a Bank with both commercial and central bank privileges.

The mechanisms of monetary cooperation between France and the African members of the Franc Zone are based on four fundamental principles:

The Franc zone is currently estimated around 3% of the money supply (broad money) in the Euro area.

The Monetary and Political stability promoted as a success after the African independence of the 1960s, is equivalent to the transfer of sovereignty of the Francophone area to the French authorities. The predominance of the French authorities in the Franc Zone Board has not really favored monetary governance, strategic development, access to credit for the business community, clear deindustrialization process. In the contrary it has favored difficult monetary convergence of the various economies, and a blockade to the African continental and regional common currency… In fact, it has predominantly privileged the Stability of non-democratic regimes with fake political alternancy or no political alternancy at all.

The convertibility between West and Central CFA zone could be misleading: same currency, same parity and same monetary value against FRF and Euro. But high additional costs (commission, non official exchange rate up to 30 % reduction)… West African CFA coins and banknotes are theoretically not accepted in countries using Central African CFA francs, and vice versa. The bad part of the story is that the convertibility is only through the French Treasury. In fact, it is not accepted in the major part of the Euro Zone and definitively not in the USA except through the Euro.

As the Francophone African countries must transfer on the accounts of the French Treasury 50% (half) of their foreign exchange reserves, the future of the CFA Franc seems bleak. There is not clear proactive move forward from the concerned African Ministers of Finance and Central Bank Governors. The convergence criteria among West/Central African countries are still on paper. The African monetary Fund, the African Central Bank and the African Common Currency (regional or continental) are still postponed… after 2015, or later, and 2021 was often mentioned… An effective democracy in the Francophone economies could speed the matter.

According to the International Monetary Fund statistics and benchmarking the 2004-08 period with 2012, Sub-Saharan Africa is doing better than the CFA Franc Zone (see Table 1 annexed).

The question raised is simple: Could the President François Holland change the present status quo of the transfer of the African monetary sovereignty to legitimate and democratically elected African representatives before the end of its Presidential mandate in 4 years and 7 months? Or is he going to perpetuate the post-colonial win-win approaches  1? 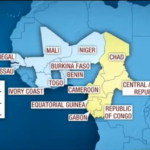