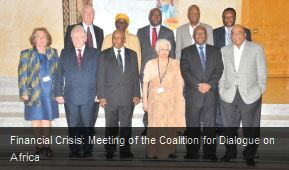 COALITION FOR DIALOGUE ON AFRICA (CoDA) 2009

One of the four-fold priorities of CoDA : “Africa’s Response to the Global Financial crisis”

In that connection, the African continent should propose responses which are not necessarily similar to those of rich industrialized countries. The Coalition for Dialogue on Africa (CoDA) offers an alternative perspective to the dominant economy by giving pride of place to the point of view held by Africans on alternative responses to the consequences of the 2008 financial crisis in Africa. The paradigm of economic and financial dependency underlying economic operations, financial transactions and strategic decision-making processes in Africa no longer meets the concerns of African economic operators, if at all it ever did.

Consequently, it is imperative to define the ramifications of a salutary break with the palliative economy in Africa and cause the rich industrialized economies, resolutely geared towards a post-industrial civilization, to no longer consider Africa as a variable adjustment. Post-industrial societies have the propensity to consider their own solutions as universal solutions to wealth-creation problems which regularly lead to shortcuts unacceptable to Africa, such as the universalism of de-industrialization. In addition, the financial crisis should not conceal the systemic crisis besetting Africa despite deep-seated short-comings in terms of unity on major strategic issues pertaining to currency, finance and the economy. Therefore, it is against such a backdrop characterized by the quest for consensus that the major impacts of the 2008 financial crisis will be highlighted, with the objective of breaking the vicious cycle of unimplemented precepts, without being ensnared by “poverty reduction” which is not synonymous with shared wealth creation.

Hence, far beyond straight-jacket solutions, African leaders should resort to a pre-existing methodology that has been successfully implemented and tested in Africa by their African predecessors prior to the dislocation of the colonial economy and the transfer of African resources to the West. There is need to reinvent contractual solidarism in economics so as to better manage the aftermath of the 2008 crisis, ensuring monitoring and salutary anticipations. No solution will be sustainable if its prior objective is not to help Africa regain its economic sovereignty.

Africa is not in a recession in 2009. It should be able to resume its pre-crisis level of economic growth in 2010, and pursue its slow growth. The main lesson drawn from the 2008 financial crisis is that the market is in no way a “good” or the “better” regulator of financial or economic crises. The market is not reputed for reducing inequalities, whereas a responsible and regulatory State can do so and thereby justify the crisis exit strategy, depending on the various regions of Africa. It is the responsibility of Africa to organize this renewed function of the State.

In fact, the financial and economic vulnerability of Africa depends more on strategic decisions. This financial crisis, coming on the heels of two other crises, namely the food and energy crises, has weakened, among other things, the global fiscal balance, the external current balance and reserves, industrial bases and, of course, has globally eroded the export surpluses. The 2008 financial crisis considerably reduced the budgetary margin for manoeuvre of African States.

In a globalized world, transfers of financial resources are indirectly linked to the economic supply of industrialized and emerging countries. This is obvious in the slump in remittances from the Diaspora, foreign direct investments, portfolio investments, development aid and world demand for African products. Such a reversal should not prevent laying the foundation for an economy built on local demand and structured around an economy of proximity, if indeed the social sector, most especially social security, is to be taken into account. Considered on a collective basis, it is the continent’s lack of financial and monetary sovereignty coupled with the weakness of productive structures that limit the possibilities of preventing and controlling a new financial crisis. Africa is invited to seek the paths to economic resilience while speeding up the advent of its own single currency.

With a modest contribution to global economic growth, Africa is duty-bound to reinvent the paradigm of “contractual solidarism” in economics. It is recommended that Africa evolve towards economic and financial resilience underpinned by “a multifaceted booster of purchasing power, wealth creation and economic prosperity”, which should be part of a new intelligent partnership between leaders and the organized African civil society. The idea here is to use the 2008 financial crisis as a lever to buttress and promote alternatives centred on the improved standard of living of the African peoples.

Furthermore, the marginalization of Africa in multilateral decisions has led the major industrialized countries to believe that decreeing the universalism of solutions is a de facto response to African problems. Indeed, the over-simplification of the complexity of economic modus operandi on the ground is the root cause of strategic decision-making and economic governance errors. Unfortunately, with respect to local decisions, African economic operators, taxpayers, consumers and electors, considered an emerging purchasing power market, are completely denied transparency in the dissemination of information and participation in the decision-making process.

Hence, there is need to reinvent the ancestral strengths of an economy founded on contractual solidarism wherein regulation, control and transparency regain their rightful place. Such an Afro-centric economy can only be championed by Africans themselves. Most of the African civil society and the private sector cannot be left out, despite numerous constraints hindering the emergence of democracy in the economy. It is suggested that an Agile African Pact to boost purchasing power, wealth creation and economic prosperity be instituted at the regional, sub-regional, sectoral or bilateral levels with democratic checks and balances comprising social partners from civil society and the private sector. This Common Pact will serve as “common benchmarks” to map out alternatives in economy and finance to weigh the choices and decisions that will guide the future of Africa and African tax-paying citizens in the short, medium and long term.

Consequently, Africa cannot subscribe to a future tax on international financial transactions if it will only help to absorb toxic assets and bad debt, instead of bailing its future Pact to boost purchasing power, wealth creation and economic prosperity (Pact). The objective here is to enable the African economy to be classified among middle-income economies.

Three major classifications have been suggested to serve as a framework proposal limited to a specific geographical location. They involve emergency and short-term measures (1 to 3 years), medium- and long-term measures (3-7 years and 10-25 years) and anti-palliative measures (or counter-pitfall measures pertaining to poverty). Economic operators were divided into seven major groups, as follows: (1) African Authorities (AA); (2) Public Donors (PD); (3) Foreign Direct Investors (FDI); 4) African Private Sector (APS); (5) African Diaspora (D); 6) African Civil Society (ACS); and (7) International Civil Society (ICS). The proposed measures should, as of necessity, not be used as antidotes for palliative approaches which at times make the African operator unaware of being perpetuated as an adjustment variable.

As far as possible, there is need to systematically propose operational implementation modalities, without lapsing into “all that needs to be done is only to”. In addition, proposals on plausible and alternative sources of financing will be assessed without resorting to the so-called “international community”, nor systematically to the State, except the latter plays a role in regulating, accompanying and disseminating knowledge, skills, technologies and technical expertise. 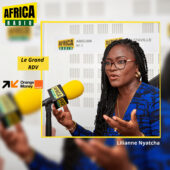 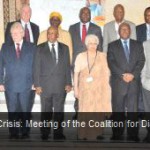 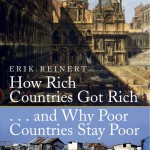